The Structured Dialogue is composed of three main parts:

About 35 representatives from civil society in the EU Member States convene in different European cities and Brussels to discuss a selected topic in a Brainstorming Session. These representatives are selected after responding to a call for applications and on the basis of achieving representation from a diverse range of interests and a broad geographical spread.

The report of the Brainstorming Session summarizes core ideas gathered during the meeting and messages to be conveyed. All finalized Brainstorming Reports are made available on this website.

The participants of the Brainstorming Session meet representatives of the European Commission at a Dialogue Meeting in Brussels. The aim is to present and discuss the outcomes and key messages resulting from the Brainstorming. The discussions held during the Structured Dialogue with stakeholders have been complementing the work and dialogue between EU decision-makers, which is taking place through the OMC on the same themes.

Under the OMC, experts from ministries of culture and national cultural institutions meet five to six times over a 1.5 year period to share good practice and produce policy manuals or toolkits, which are shared widely throughout Europe. Within this framework, EU Member States exchange information on how they design policies and funding schemes. This form of cooperation, referred to as the Open Method of Coordination, is used in many policy areas.

Through the Structured Dialogue, the Commission maintains a regular dialogue with civil society. During this process, stakeholders provide key ideas and messages that can also be shared with the relevant OMC experts. This dialogue with the culture sector provides a framework for exchanging views and information, and ensures that the voice of civil society organisations is heard.

From 2008 to 2013, the Structured Dialogue has been made up of two complementary strands: the European Culture Forums and the Civil Society Culture Platforms (Intercultural Europe; Access to Culture; Cultural and Creative Industries).

The Forums were organised by the European Commission every two years, with the last edition taking place on 7-8 December 2017 in Milan. However, as of 2015, the second strand of the Structured Dialogue has taken another form, with the launch of Voices of Culture. 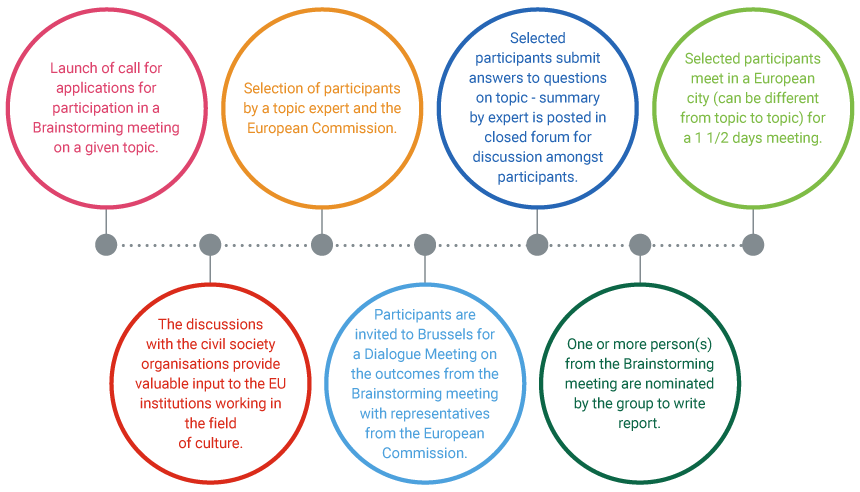 Through an open call for tender, the European Commission has selected the Goethe-Institut, to implement the 'Voices Of Culture' project.

The Goethe-Institut (GI) is the
international cultural institute of the
Federal Republic of Germany, and
operates worldwide.
We use cookies to ensure that we give you the best experience on our website. If you continue to use this site we will assume that you are happy with it.OkNoPrivacy policy